Another block of raclette cheese – another non-traditional raclette. For this one we replaced the potatoes with brussel sprouts and bratwurst.

Trim the stems of the brussel sprouds and steam them for about 15 minutes. I try to use the smaller brussel spouts, they seem to be more flavorful and more fun to eat :). For color and variety I also added some pieces of bell peppers and some baby carrots
Cut the brats into half inch slices and fry them in a little olive oil.

Put the brats and sprouts in a casserole dish and cover them with thick slices of raclette cheese. The dish is then placed in the broiler just long enough to melt the cheese and get a bit of a brown crust on top. 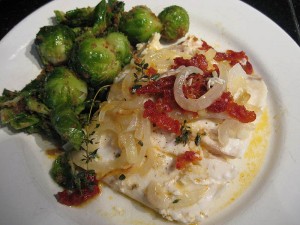 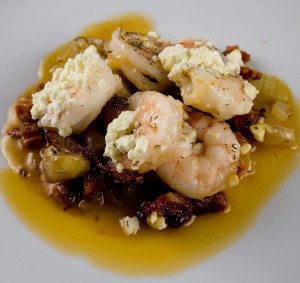 Can’t believe how much time past since my last post. One reason is our recent trip to Greece and Turkey. While over there I got to taste a lot of good food. So I came home with a few new cook books and plenty of ideas for things to try.

Here is the first example. We saw this pie all the time, usually for breakfast or fast food snack in bakeries. It’s pretty easy to make, particularly if you buy ready made filo dough (like I do)

Filling: Cook the spinach in a little water and then squeeze out any liquid as good as possible. Now mix the spinach with some crumbled feta cheese, chopped green onions, 1 Tbsp. dry dill (or use fresh if you have any), 2 lightly beaten eggs, salt && pepper.

Assembly: Grease the pie pan (I used a cast iron pan), gently put one sheet of filo dough in the pan, spray or brush with some olive oil. Let some of the dough hang over the side of the pan (you will need this later). Since the filo dough is very thin add another 4 sheets, applying some oil on each layer. Add the filling and now fold the overhanging dough over the filling to form sort of a package. Again apply oil on each layer as you fold.

Baking: Put the pan in the oven at 375 F for 40 minutes or until golden brown.