Well, it’s not exactly the traditional raclette, but a good way to enjoy it anyway. We sometimes get a nice block of raclette cheese and since we don’t have the tools typically used to make raclette we came up with this modified version.

Simply boil some potatoes (we use smaller ones and leave the skin on). Then cut the potatoes into smaller pieces (halves or quarters), put them in a casserole dish and cover with thick slices of raclette cheese. The dish is then placed in the broiler just long enough to melt the cheese and get a bit of a brown crust on top.

We just put the dish on the table and eat right from it.

The supermarket had some pork shoulder on sale, I wanted to do a dish for which I was going to grind some pork, seeing those big pieces with the skin I was reminded of “Schweinshaxe” in Germany, so this is what happened:

Pork: Rub the pork skin with salt (I actually used fish sauce, a bit of Thai-German fusion :) and leave it in the fridge over night. Preheat the oven to 450F and put the pork on a rack sitting on a backing sheet. Roast for about 45 minutes. Serve when done. Note that the nice crispy skin will only be good for a relatively short time after it comes out of the oven.
I actually used my portable convection oven (similar to this) this time. These little ovens are a very handy thing to have around. I particularly like the fact that I can put it outside and so avoid the cooking smells in the house.

Vegetables: To go with the pork I steamed a variety of little squash which I picked up at the local farmers market. To that I added some cherry tomatoes also from the farmers market.

Dressing for the Vegetables: Table spoon of finely chopped onions, a little red wine vinegar, some olive oil and some fresh basil chopped up. Simply mix and season with salt and pepper.

The pork is sometimes served with some sauce or gravy, but I like to just enjoy the crispy skin without any added flavours. 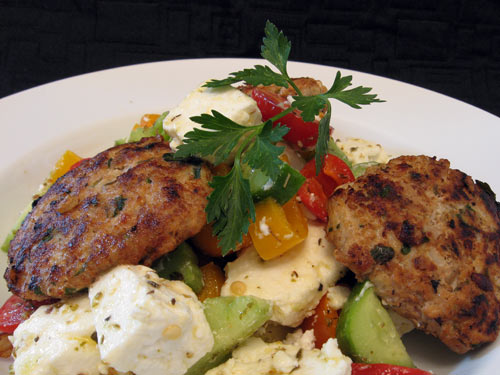 This is a standard favorite in our house on warm days in summer.

Salad:
Dice cucumber, bell peppers, onion (we like sweet onion) and feta cheese. Mix all together and add olive oil, olives and some oregano.
A note on the feta, we like big chunks rather than the crumbled stuff.

Pork Patties:
For this I bought a big piece of pork loin and ground it in the food processor. Mix some onion, thyme, oregano, chopped parsley, egg, salt & pepper and some bread crumbs to get a hamburger patty consistency. Form the patties and pan fry or bake in the oven.

Serve the patties with the salad.